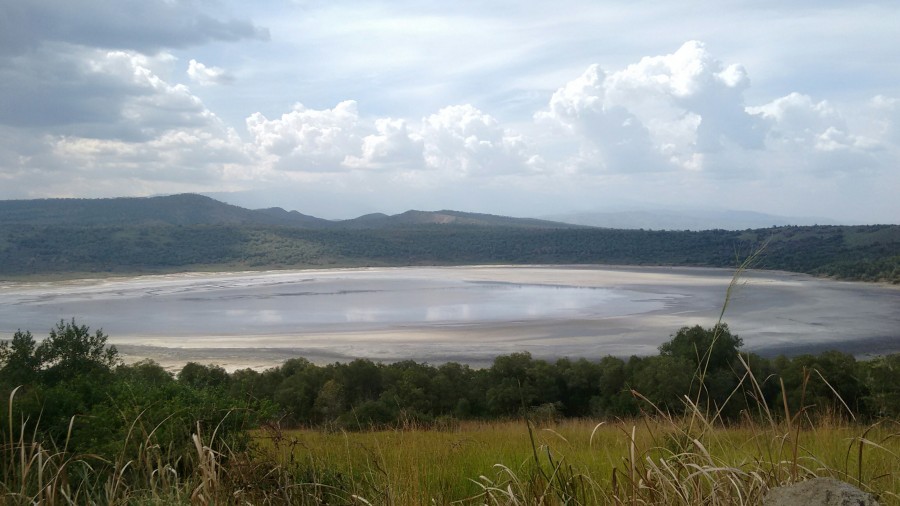 I know Easter is already a thing of the past, but this isn’t going to be an Easter post exactly 😉 It just so happened that we decided to get out of Rwanda and explore the neighbouring Uganda for the long Easter weekend. And when we got back, it took me a while to return to the world of internet after a nice break from constant WiFi, hence the delay in telling you how it was! 🙂

It’s a bit strange to be in Rwanda during those holidays that are so commercially celebrated in the West – i.e. Christmas and Easter. You may remember my post about the former, and it turns out that the latter is even less visible. I mean – literally no sign Easter is coming. No ubiquitous bunnies and eggs, no decorations, no special meals to prepare. Again, this is simply a religious holiday, people go to church where they celebrate the Resurrection, and life goes on. Nearly all Rwandans are Christians but just over half of them are Catholics (after the Genocide many left the Catholic Church and joined other churches, I mentioned it here). While on most Sundays I can hear loud and cheerful singing from the nearby church, and people very often refer to God as the one who is good and will provide, etc., religion is simply an integral part of everyday life and no one really talks about it much. No one has ever asked me about my beliefs or whether I went to church, but then again, it’s probably because it’s generally assumed that everyone believes in something and is part of some religious practice, be it Christian or Muslim. Still, being used to the vibe of Christmas and Easter seasons, it feels a bit strange not to have that at all! I found this article which seems to confirm that Easter isn’t that “big” in Rwanda anymore. So we decided to travel to Uganda, mainly to see some wildlife in the Queen Elizabeth National Park (QENP), especially that T’s birthday fell on the Tuesday just after Easter 🙂

The drive to the border was quite easy and quick. The border itself, though, was a bit of a cheerful mess 🙂 The Rwanda-Uganda crossings are all very busy and lots of people cross it on foot. Many Rwandans live in Uganda, and vice versa, and trade is pretty big. They don’t need passports, only IDs, as Rwanda, Uganda and Kenya have a special agreement – all you need is an interstate pass, a small piece of paper you get each time you cross the border. We discovered that this applies to foreign residents in those countries as well, which meant we didn’t need visas, yay! After queuing for a short while (it wasn’t easy to decide whether we should be waiting in the line for Entry or Exit, but then it turned out it didn’t really matter, we were simply asked which way we were going), we got laughed at by the Rwandan border guards about going to the QENP to see their famous tree-climbing lions, which clearly are just baboons, and we were silly wazungu who didn’t have a clue 😉 Then we got back into the car and slowly drove through potholes and mud, slaloming amongst trucks and myriads of people, with the intention to find an immigration office on the other side. Alas, we didn’t. Somehow we got waved through by both border guards and army, both Rwandan and Ugandan, and suddenly realised we were definitely in Uganda now as the traffic was on the other side of the road! Yes, they drive on the right in Rwanda, and on the left in Uganda. We weren’t sure what happened but thought that maybe it’s just a one-way crossing, given the relaxed rules and agreements between the two countries. So we just drove on 🙂

The drive was great as the highway was of a very good quality and there was very little traffic. As soon as we left the border behind, we came across a Good Friday procession. Clearly they do Easter differently in Uganda! Such gatherings were quite common all the way to the park, and by the looks of the priests we guessed they were all Catholic. Most participants carried small wooden crosses and I assume this was the local version of the Way of the Cross. But not everyone was taking part as there were also many people simply walking around, sitting outside shops (all open), working in the fields, kids running around and playing… All seemingly in perfect harmony. 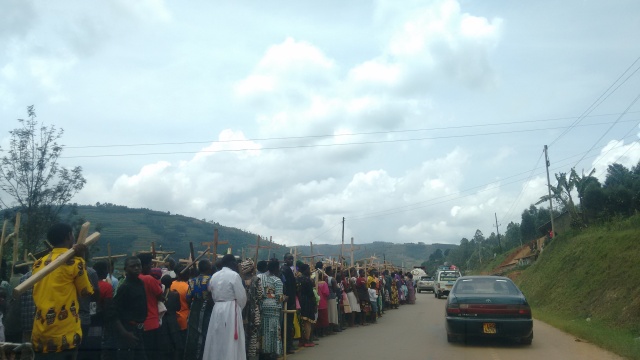 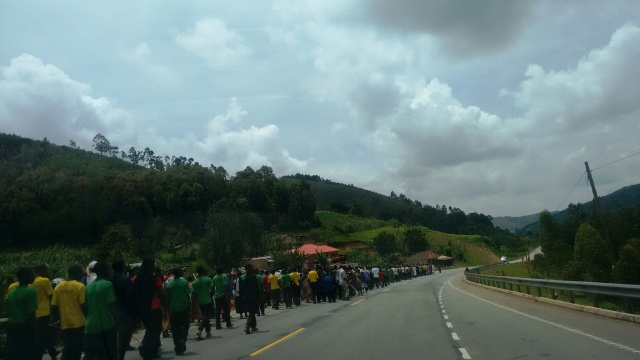 The last 40km were quite a nightmare as the state of the road was simply abysmal. It looked like a bomb site and there were more holes than actual road, and I think it’s the worst I’ve ever seen. So when we finally reached Pumba Safari Cottages, we were desperate to just sit down and relax (by the way, they only had WiFi in the restaurant area, and the password had “Timon” in it 😀 ). It is a bit weird that Uganda is one hour ahead of Rwanda, especially that the drive from Kigali is northwards and slightly west. But this meant dinner was coming sooner! 😉

Interestingly, we were served chicken, although technically Catholics are not allowed to eat meat on Good Friday. We were also offered beer… While we were eating, we suddenly heard someone shouting into a microphone and music playing. Our host explained that it was the local DJ advertising a party in the night club called Saturn the following evening! And shortly afterwards the voice of the muezzin announced the evening prayer at a nearby mosque. Overall, a pretty non-traditional start to Easter 😉

The Queen Elizabeth National Park is the most popular park for visitors to Uganda. It’s pretty big (nearly 2,000 square kilometres) and very picturesque. We ended up spending just one day inside the park as the road to it was pretty dreadful again and we simply didn’t want to lose a wheel… But even though we didn’t get to see the tree-climbing lions (no, they’re not baboons, as the Rwandan border guards suggested, they are actual lions who do like to climb trees, and when we entered the park, the staff told us where they were spotted earlier that day; they were gone by the time we got there though…), we did a nice boat trip on the Kazinga Channel, which connects Lake Edward and Lake George, and enjoyed a drink at a restaurant overlooking the channel where elephants and buffalo were cooling. There were also some huge marabou storks wandering around tables there, looking for scraps 🙂 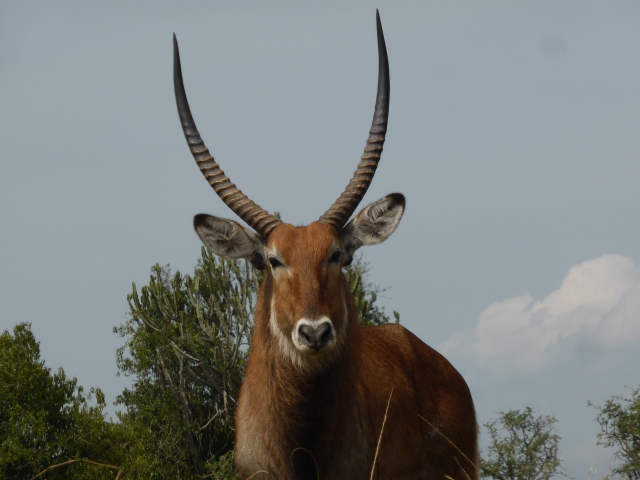 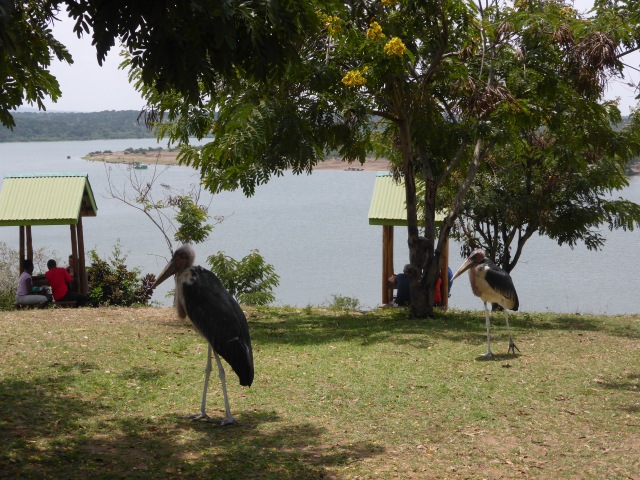 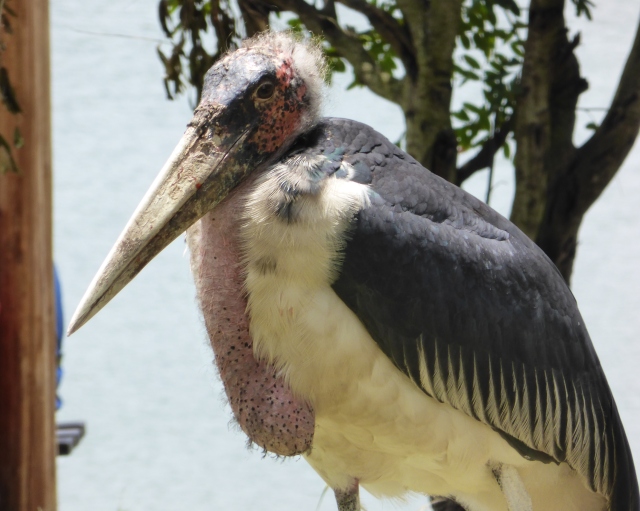 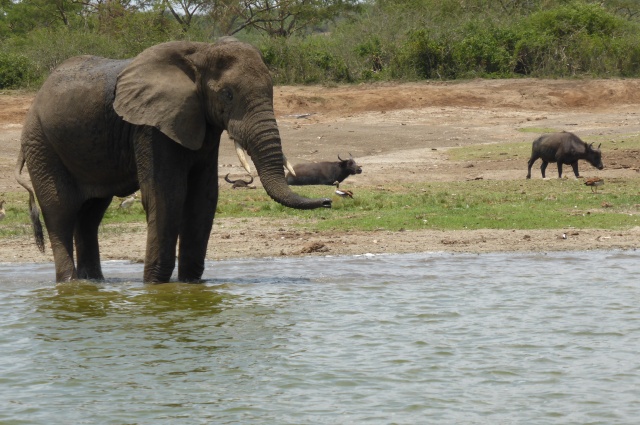 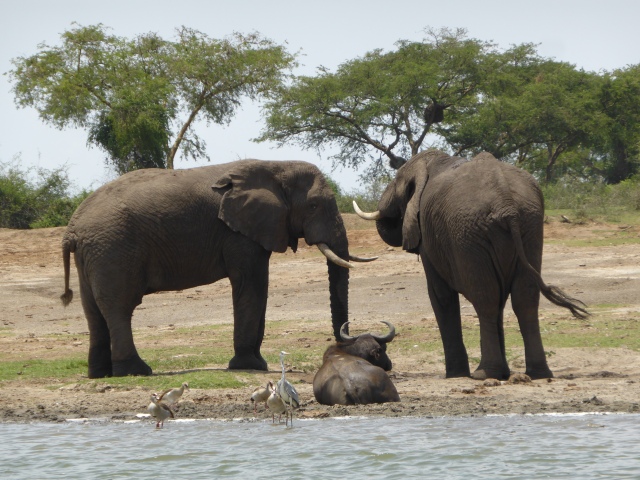 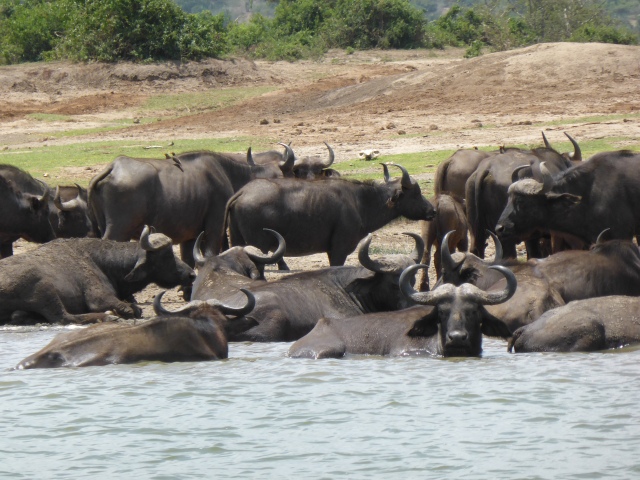 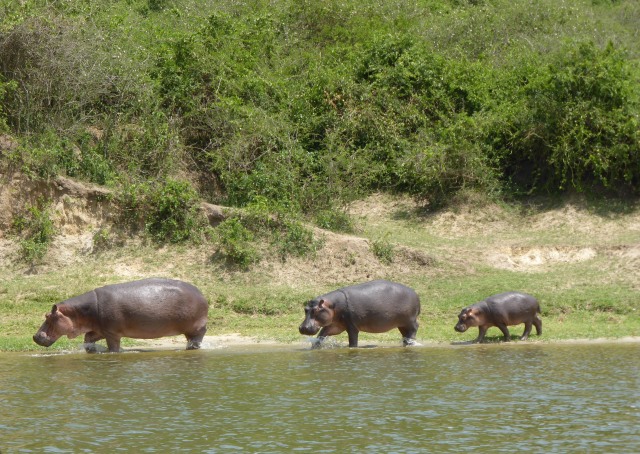 There is a fishing village along the channel, one of the very few settlements that are officially allowed to fish in the QENP. Humans and thousands of birds, hippos and buffalo hang out together in peace 😀 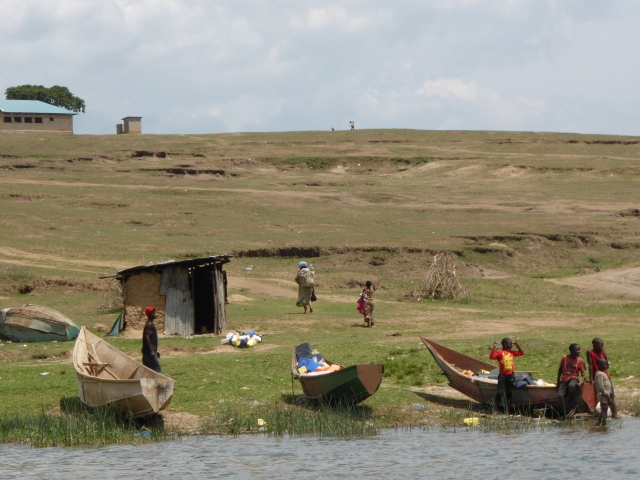 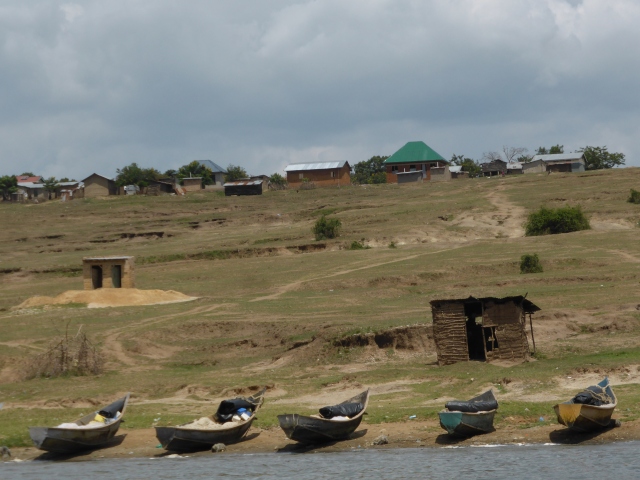 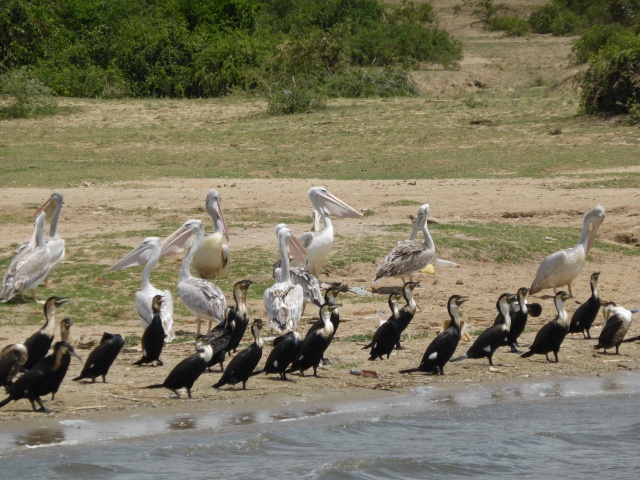 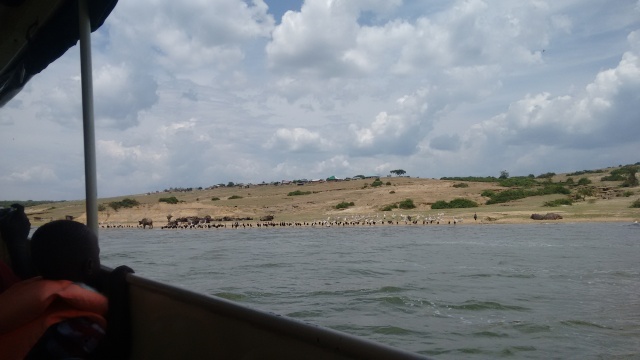 After the boat trip we drove to the other side of the park. The ranger at the gate told us where lions and a leopard were seen in the morning (sitting up in trees, obviously), but they weren’t there anymore. We sat in front of the candelabra aka cactus tree where the felines allegedly rested earlier (what a strange choice of tree by the way!) but after studying every single branch we gave up. Oh well, another time maybe! There were very few other visitors to the park so we kept driving around for a while but didn’t see much, apart from a few antelopes and some warthogs. I was very surprised not to see a single zebra or giraffe all day! They’re normally pretty easy to spot (hahaha 😉 ) and I don’t think I’ve ever been to a game park with neither of those animals around… We also got lost as there were more roads than the map suggested, and pretty bad signage, so we ended up following the sun to get out! It was a bit stressful as a storm was clearly approaching and we certainly didn’t want to get stuck in the park… Still, it was a fun day and the boat trip was definitely the highlight 🙂 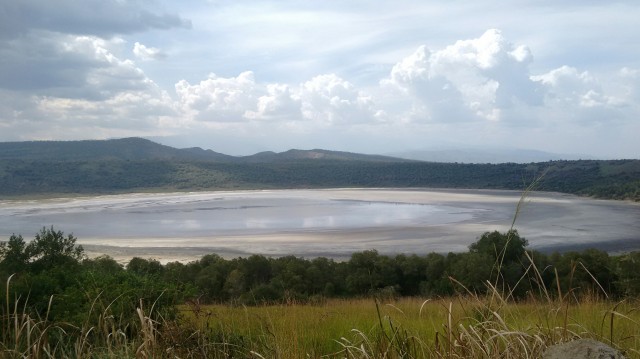 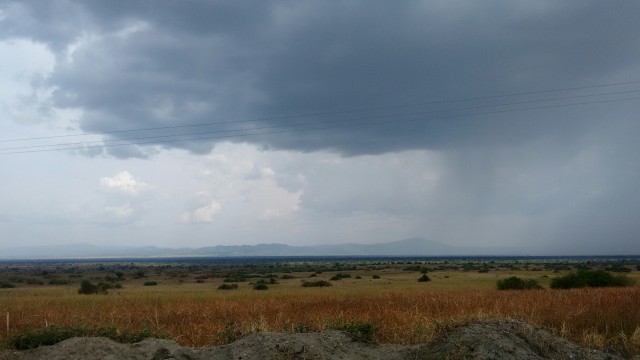 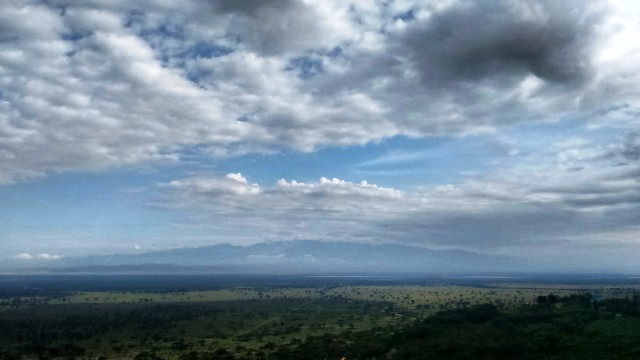 The next day was very wet so we decided to chill with books, watched lots of bird species and listened to their fabulous songs. It was all very pleasant 🙂 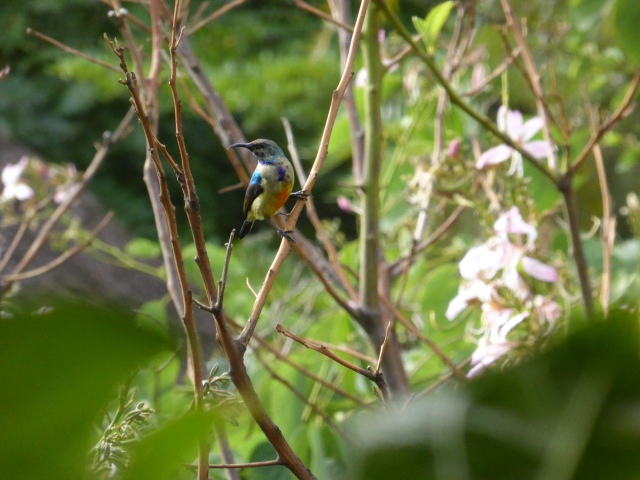 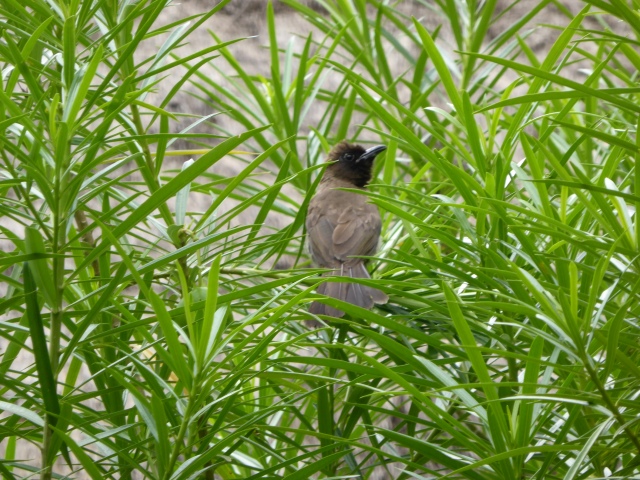 On the way back we discovered that there was an immigration office on the Ugandan side, but we had missed it because it’s just a little shack that was hidden behind a massive truck 😀 We pretended we didn’t see it again as I suppose we could have had problems explaining how we got exit stamps from Rwanda but no entry stamps to Uganda… Nobody stopped us though, and the border guards on the Rwandan side didn’t question anything either and just put entry stamps in our passports 😀 So officially I’ve not been to Uganda! 😀

We probably won’t have time to return to QENP but it was a nice place to visit on a long weekend break! And I certainly would love to see more of Uganda as the views on the way were beautiful 🙂 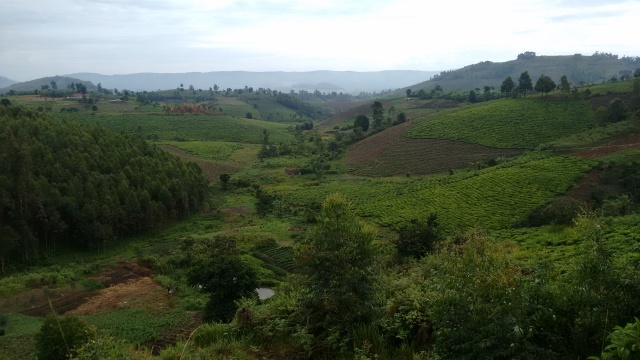 3 thoughts on “Easter in Uganda”