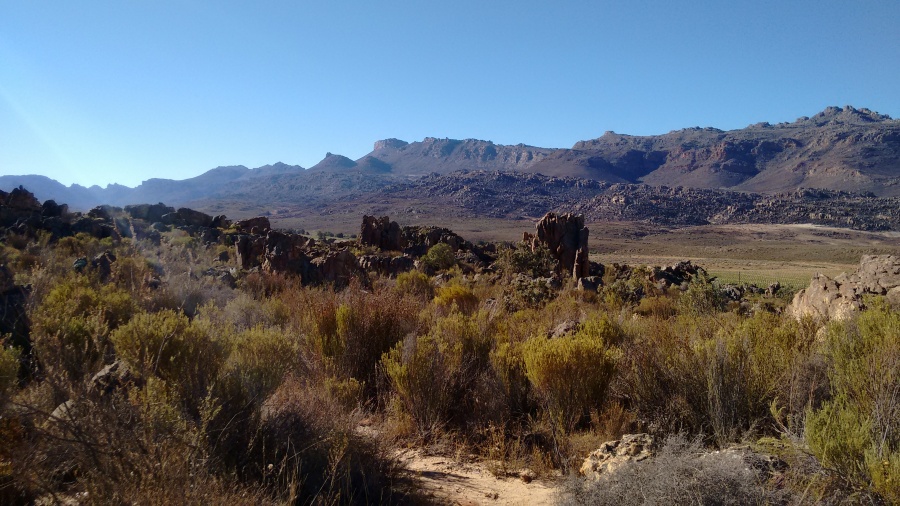 Time to share some more hiking stories and photos from my recent trip to South Africa! In my previous post about the Cederberg I told you a bit about this magical place and how hot it was! But the temperature didn’t deter us and we were rewarded with another fantastic day out which included climbing rocks, admiring rock paintings (not only those made by the Bushmen!) and drinking lovely wine 🙂

The second night at our Algeria cottage was slightly disturbed by very strong winds blowing through the valley and throwing all sorts of stuff from the trees onto the roof. It was still windy in the morning, although there wasn’t a single cloud in the sky. Again, we didn’t manage to get up as early as we had planned, and by the time we got our permits to access the caves with bushmen rock art, it was nearly 9 o’clock. We had to drive for about 30km first, and 5 minutes into the journey I realised I had left my hiking boots in the cottage! 😀 So we had to go back, and finally reached our destination at 10 o’clock… Probably not the best time to start a hike but the wind was actually relatively cool and the air felt quite fresh. There were three cars parked in the car park, and I wondered at what time these guys had set off! 😉

As you know already, the Wolfberg Arch area was closed, so we decided to see the second most iconic sight in the Cederberg – the Maltese Cross. We weren’t sure how long exactly it would take to get to it as different sources gave us different information but we expected to hike for at least 2 hours one way. Shortly after we set off, we met some people walking back, which made us wonder if they had started at dawn or ran up that trail! We were on our own from then on, only to meet a few guys just before we got to the Cross.

To get to the starting point of this hike you need to get a permit from another park office, which is spectacularly located at the Cederbeg Wines Estate (more about it later!). Then you need to drive through a gate with a padlock – when you buy the permit, you get the code to open it – and another 5km on a sandy road to the little car park. The hike is moderately difficult. It’s flat at the start but then it’s a nearly constant but steady climb on rocks and stones, like steps. There is very little shade so we were very grateful for the wind! Apart from those few people we met, we had the trail to ourselves as no one was walking up with us, everyone was already going back 😉 The views on the way were simply spectacular! It took us 1,5 hours to get to the Cross. 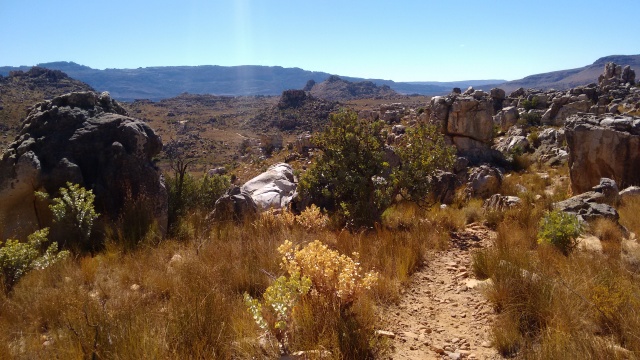 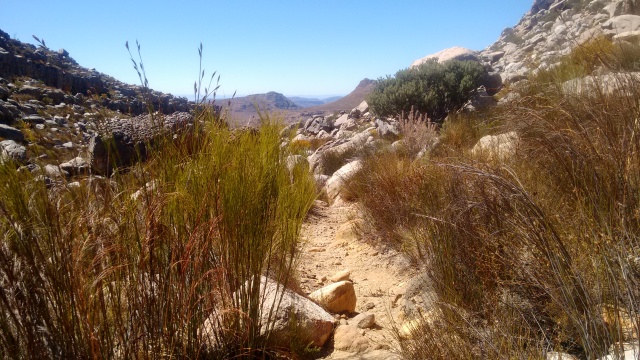 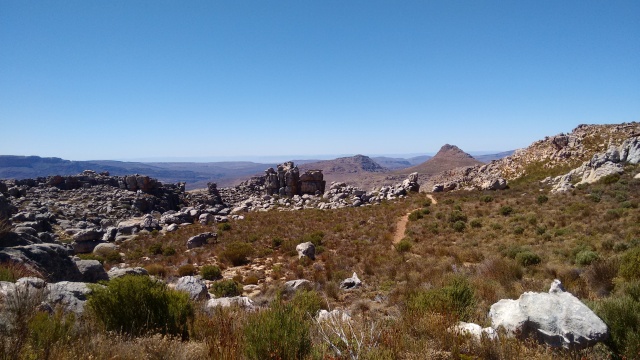 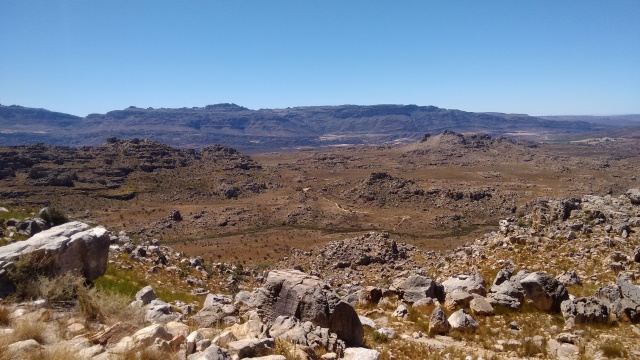 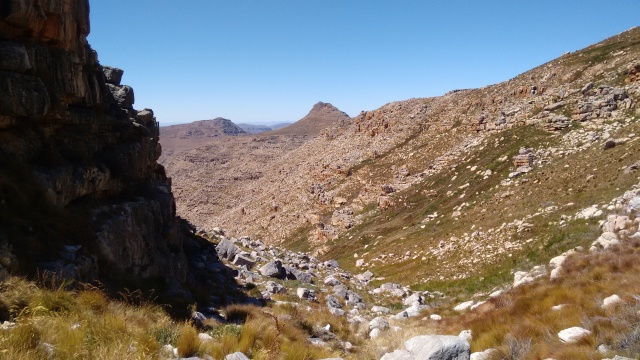 The rock formation now known as the Maltese Cross is as high as a 5-storey building! Somehow the rocks around eroded and fell apart, leaving behind this monolithic structure with a unique shape of, well, the Maltese cross 😉 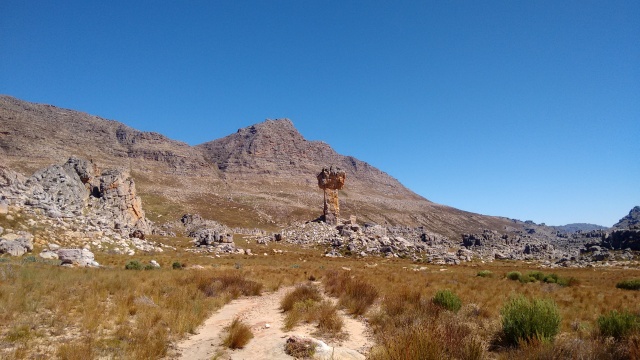 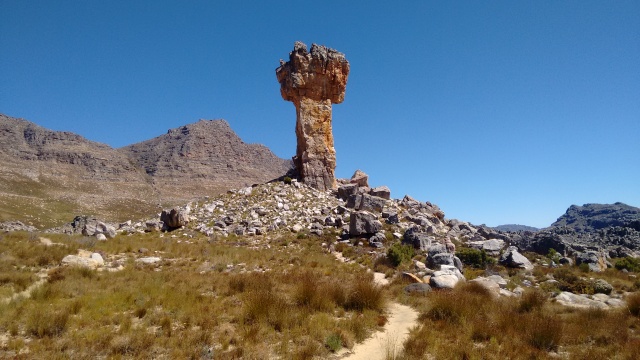 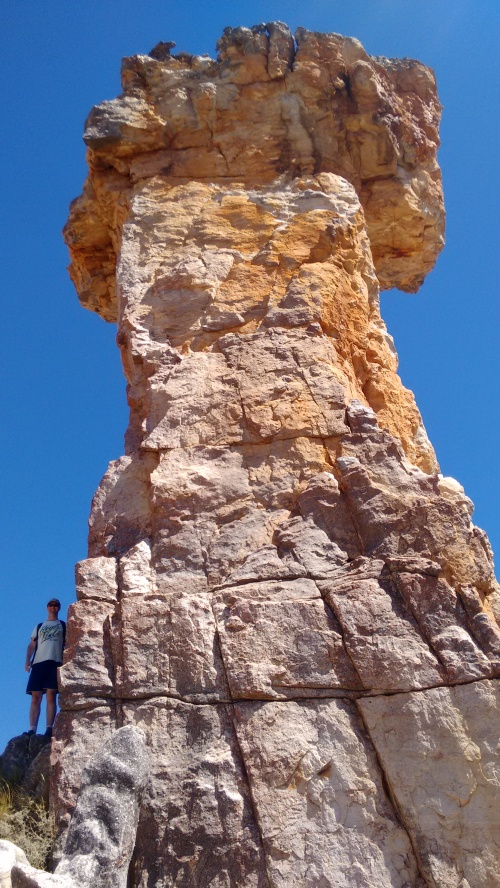 As we climbed around it to find a spot for lunch that would be a bit sheltered from the strong wind, we came across a rather gruesome discovery… 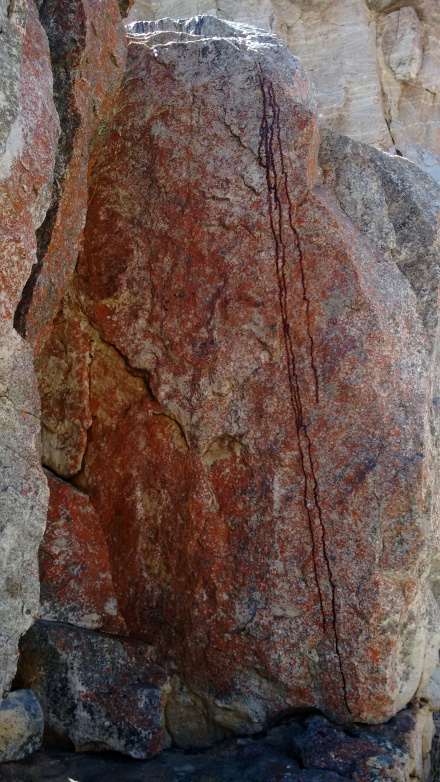 Yep, that’s blood. And it seemed quite fresh, too, still vibrant red… T. obviously had to check out the top of this rock and found a large, dried pool of redness. Something had killed something else, and eaten it in this lovely spot. Whatever died there had bled quite a lot! Interestingly there were no other remains whatsoever, no bones, bits of skin or fur. When we later reported it at the reception, the lady there was very surprised and couldn’t tell us what it could have been. Possibly a leopard (they like to drag their prey high up, usually on trees but there aren’t many of those around in this area), or some eagle, who knows. It didn’t stop us from having our own lunch a few metres away though, haha! 😀 Especially that views were like this: 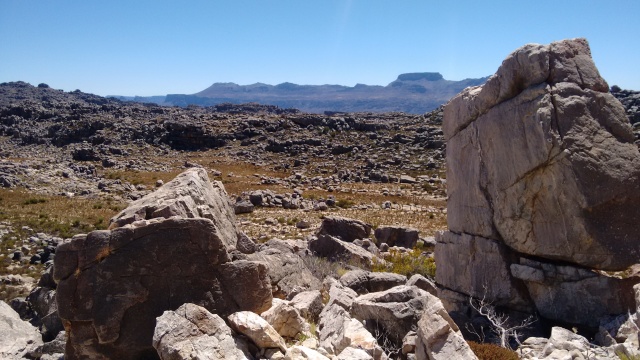 It took us just over an hour to walk down back to the car. The next stop was supposed to be the Stadsaal Caves but as the road goes via the Cederberg Wines estate, and the tasting room had just opened after the lunch break, we couldn’t just drive past such an opportunity 😉 We knew their wines from the time we lived in South Africa but I had no idea that this vineyard is the highest in the country! And probably also the most remote. No wonder they call their produce Wines with Altitude 😀 Absolutely incredible setting, and very good wines too 😉 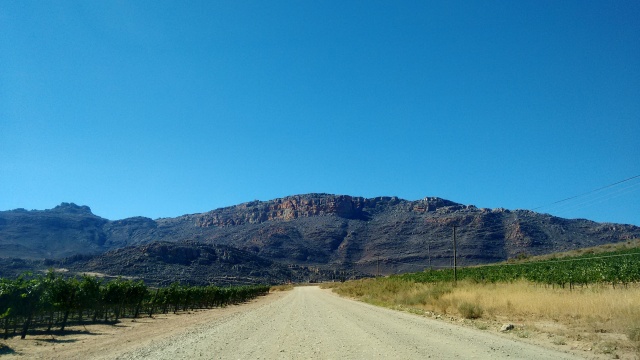 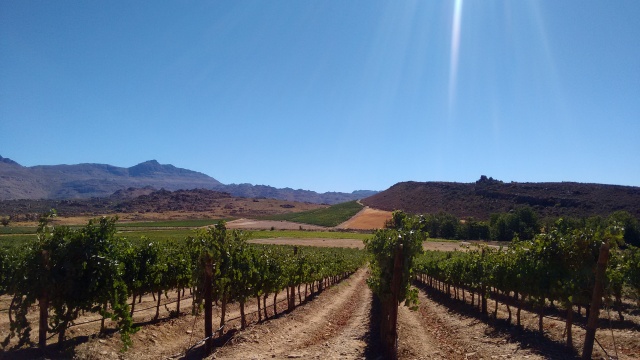 Refreshed and mellow (well, probably slightly tipsy too), we packed a box of 4 bottles of wine we bought in the boot, and set off to the caves. Again, it was just us and the most amazing landscape! Stadsaal is more like a massive collection of crazy rock formations rather than your regular caves. It’s incredible to think that people lived here for thousands of years, until quite recently… 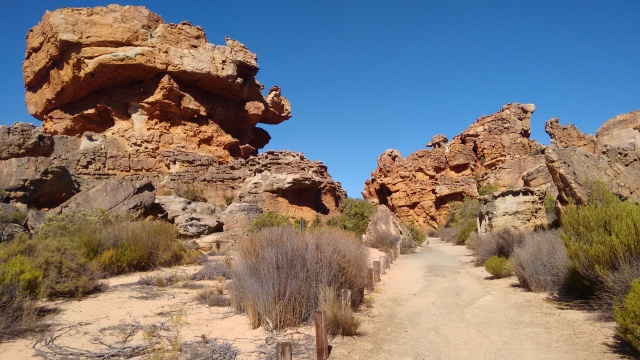 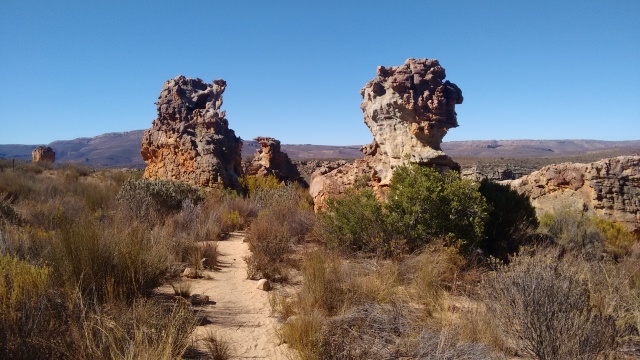 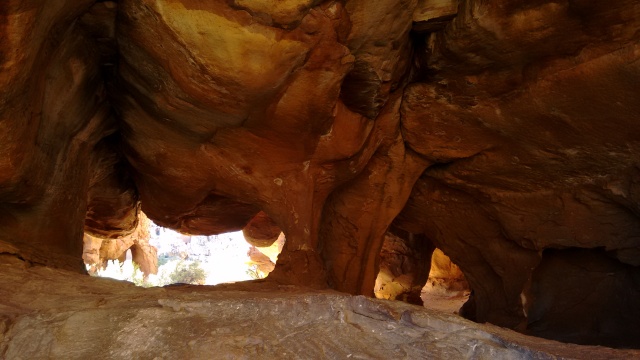 I was excited to see those famous Bushmen paintings but the first “art” we found was something quite different and it made us laugh and shake our heads in disbelief! Check this out 😀 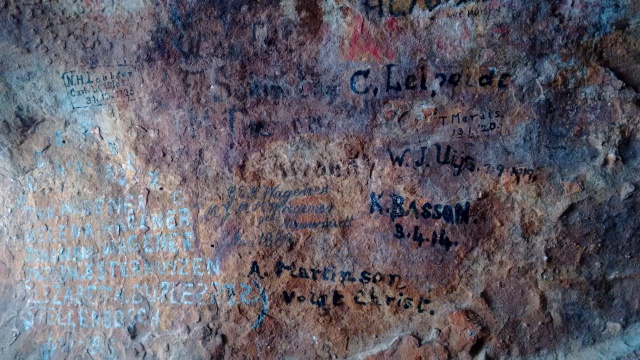 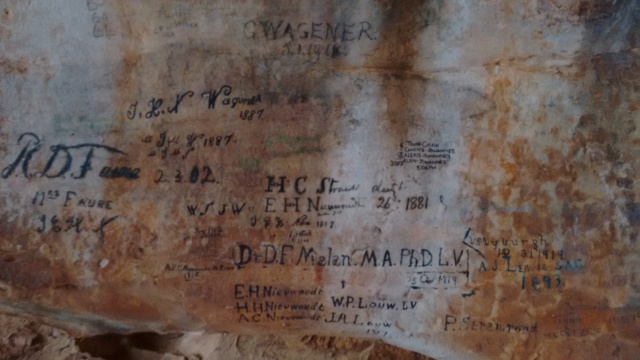 Now, what’s extraordinary about those is not just the fact that back in the late 19th century and throughout the 20th century people would paint their names in caves (“I was here!”). The second and third photo show the names of D.F. Malan and P.W. Botha (Staatspresident), respectively. The former was the Prime Minister of South Africa from 1948 to 1954 and one of the main architects of the apartheid regime; PW Botha was Prime Minister from 1978 to 1984, and then President from 1984 to 1989 – that’s when he clearly visited the Cederberg with his delegation as the date on the inscription is 1987. So bizarre to see this… Anyway, after marvelling at this modern cave art, we wandered around the beautiful site, found really nice long drop loos, and finally realised that the Bushmen art is actually a few hundred metres back to where we drove from 😉 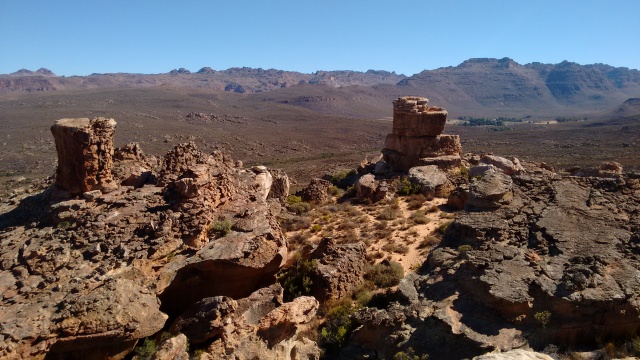 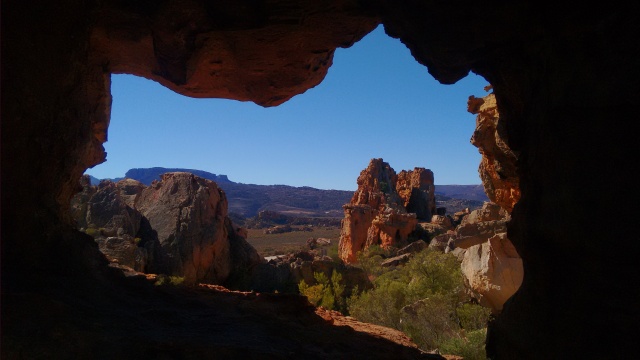 We drove back to the clearly marked site (haha), and although there is only one painting to see, the story boards had lots of interesting information about its history, as well as other features – the dassie midden and rock-sweat. 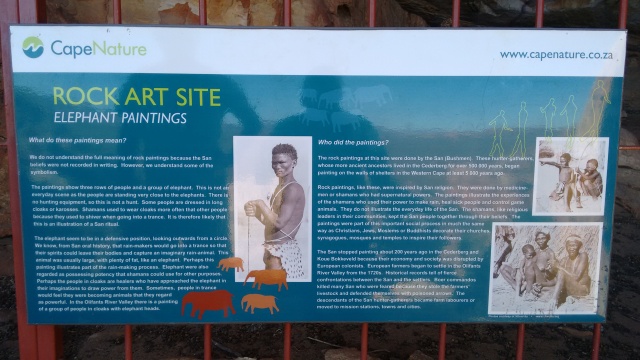 Now there was just one more rock we needed to see on our way back to Algeria – Lot’s Wife. It’s just another cool formation which is probably best seen in the late afternoon when the sun is behind it: 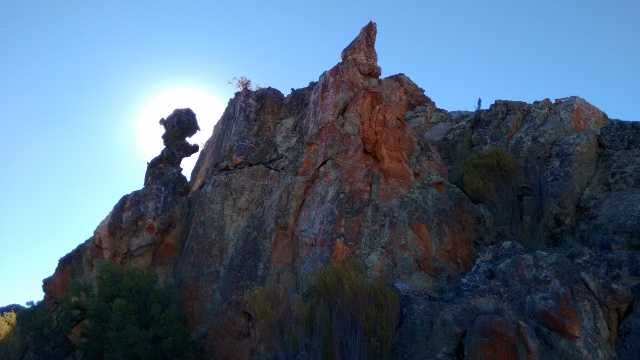 And finally it was time to drive back to Algeria, have a long cool shower, and prepare another feast on the braai 🙂 The gorgeous Cederberg graced us with more fabulous views on the way! 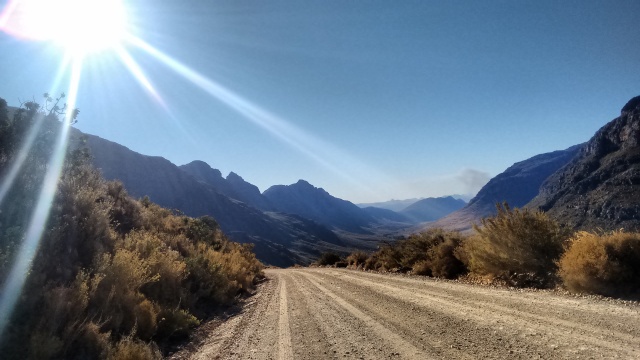 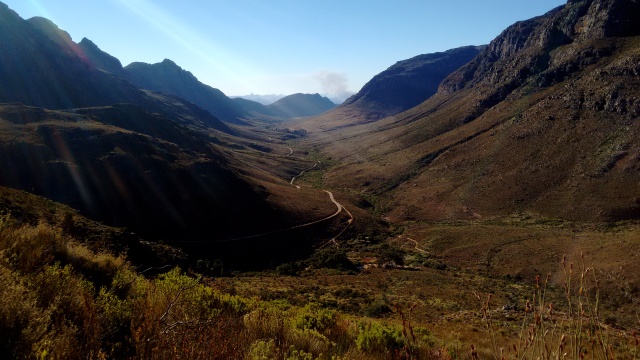 We left the next morning, still overwhelmed by the beauty of this part of South Africa. It’s this sort of place I would love to visit again and again!