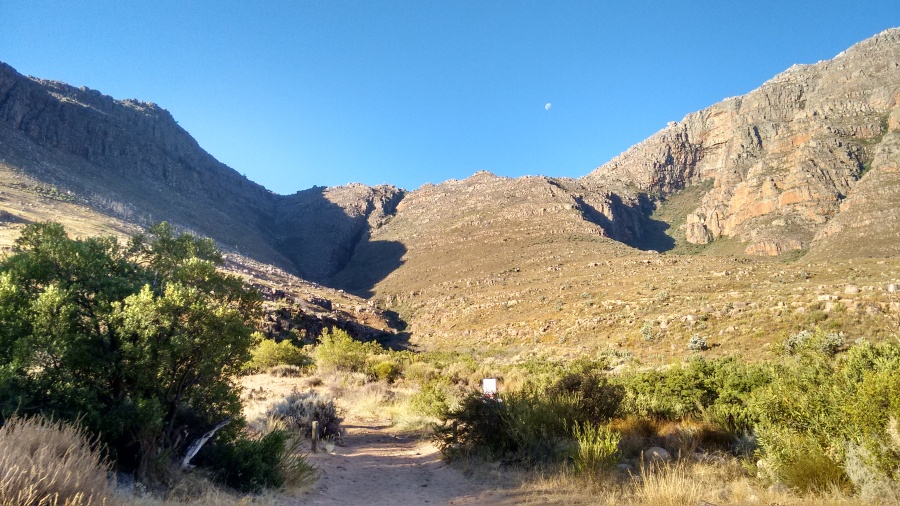 I haven’t been around for a while, so where was I? In South Africa, actually 🙂 It so happened that friends we know from Pretoria invited us to their wedding at a vineyard in Stellenbosch, and you simply can’t refuse such an invitation, can you 😀 And since it’s actually a bit of a trek from Rwanda as there are no direct flights (you fly to Johannesburg, stay the night there as the plane lands at 22:30, and then fly to Cape Town the next day, which is another two hours), so we decided to make a holiday out of it and finally get to this one place we never managed to visit while we lived in SA, and which was still on my “must visit” list. Welcome to the Cederberg!

The Cederberg mountains and nature reserve lie north-east of Cape Town, about 3 hours’ journey by car. This area has been on the UNESCO world heritage list since 2004, together with a few other reserves and parks in Western and Eastern Cape provinces. They all constitute the so-called Cape Floral kingdom where about 20% of all plants native to Africa can be found, and a third of them are endemic to this region. However, we went to Cederberg mainly to hike! 😉 And to see some bushmen paintings as well 🙂 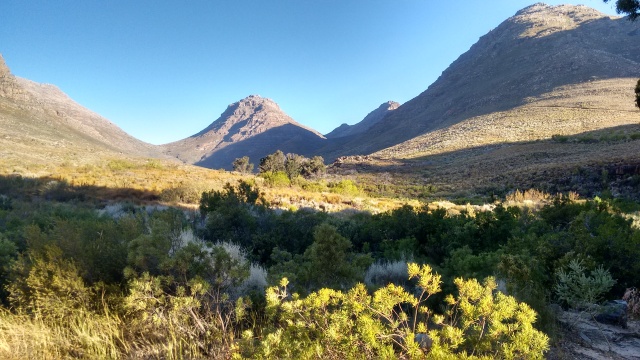 It was very hot in this part of South Africa. In Cape Town, the electronic information boards above highways warned that there were only about 112 days of water left in the dams. In Stellenbosch, a charming university town at the centre of the Winelands, there were posters all around town asking people to fix leaking taps and not water their lawns to save as much water as possible. Cederberg welcomed us with blue skies and temperature well above 30 degrees after 3pm. I had the impression of being in an oven with a fan on as it was very dry and there was pretty strong wind. Luckily we weren’t camping but rather staying in a cottage as I’m not sure if it would have been possible to get any sleep in a tent in this heat. On the other hand though, I wasn’t actually that bothered by it, maybe because of near zero humidity, and the wind was helping a bit as well.

The main base in Cederberg is somewhat confusingly named Algeria. This is thanks to a French nobleman, count de Vasselot de Régné, who came to South Africa in 1880 to assume the role of Superintendent for Forests and Woods, and Cederberg’s landscape reminded him of the Atlas Mountains in Algeria 🙂 Algeria has 48 camping sites and six lovely new cottages, each with two bedrooms, a bathroom, large kitchen and living room/dining space, and a patio with a built-in braai (grill) of course – in South Africa, braaing is a way of life 😉

The view as you enter the Cederberg area

View from our bedroom 🙂 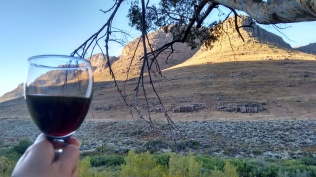 The start of the waterfall trail

That afternoon we only went for a short walk, and we made a plan to hike to the nearby waterfall the next morning. In the meantime, we found out at the reception that the main attraction of the Cederberg, the hike to the Wolfberg Arch, was closed! It turned out that the week-long fires just before Christmas caused so much damage to that area (three campsites burnt down) that the park authorities had to close it, most probably until the end of this year… Oh well, at least our cottage was called Wolfberg Arch and it was decorated with the photos of it! Plus I now have an excuse to return to Cederberg again 😉

We really didn’t feel like getting up early the next morning, and instead of setting off at 7.30am, as planned, we eventually began our hike to the waterfall nearly two hours later… It was just us as other hikers clearly were already on their way up, or had already reached their destination by now 😉 Luckily it’s not a long hike as the trail starts just on the edge of the campsite and it takes about an hour and a half, at a steady pace and with a short break to drink some water in the shade of (not so many) little trees. On the way we encountered a group of park employees who clearly had just done some climbing and probably the trail inspection, and were now coming down whistling and laughing loudly. It was obviously hot so we wondered how much of that waterfall was actually left since it hadn’t rained for a few months. When we got to it, it turned out that not so much, especially compared with the photos we had seen! But it was still very pretty, and there was lots of shade and beautiful views 🙂 A few people were already there but were just getting ready to leave so soon we had the whole place to ourselves.

View from the trail towards the cottages 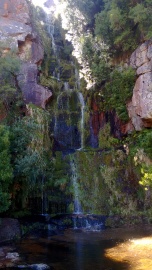 View from the waterfall

We spent some time by the waterfall, and when we decided to make a move back to the cottage, it was already past noon. There was a bit less shade now on the trail, but the descent was easier than climbing as the path is mostly large stones and rocks, like steps, so we decided not to stop and keep walking. The last stretch of the trail is flat and completely exposed, and we had to speed up a bit to get to the shaded campsite asap. While we were covered in sunblock, the heat was so overwhelming that it felt like the hot air was burning my skin. We met two couples about to start their hike, I wonder if they melted on the way up 😉

As we sweated quite a bit that day, we decided to chill for the rest of the afternoon 🙂 It was actually even hotter then, and the wind was blowing again, not cooling anything at all but just the opposite – it was like someone opened the oven door and let out the scorching hot air. We planned a longer adventure for the next day, which would require a drive through the whole park. Again, we wanted to start relatively early so as not to die of heat right from the start, and again – we failed 😉 But I’ll tell you more next time!