The vast majority of books on Rwanda, of which most are non-fiction, deal with the genocide. It makes for a rather heavy reading, and after a while one feels exhausted and starts to feel more and more frustrated or numb. Therefore, it’s quite refreshing to read an uplifting story of post-genocide Rwanda, even though the tragic events of 1994 still feature in the characters’ stories. 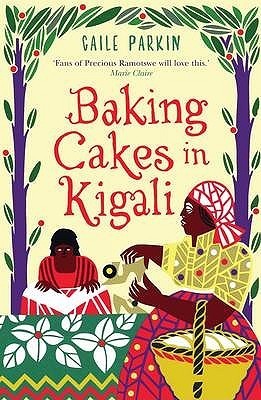 The setting of this novel is Kigali in the year 2000, 6 years after the genocide, and the main character is Angel Tungaraza, a middle-aged Tanzanian lady whose husband’s job at the Kigali Institute of Science and Technology (KIST) brought them with their five grandchildren to this city. They live in a secure compound with all sorts of expats, mostly Westerners, and Angel runs a successful baking business at home. The book is divided into 14 chapters and each follows a similar pattern: someone comes to order a cake, Angel gives them her catalogue with photos of cakes she has made so far, goes to make a cup of African tea (which is a bit like Indian chai, with milk, sugar and spices), and then we get to know new characters and their stories. Meanwhile, we also find out more about Angel and her family, and why she has all the grandchildren with her. She is the pillar of the community, a simple woman who may not have much education but is simply very wise, curious about the world and other people, and has the heart of gold. She battles her own demons too, but always has a kind word for everyone. It’s impossible not to like Angel, she is like a granny you want to snuggle up with and eat all the delicious cakes she has baked 🙂 We meet many of the compound inhabitants as well as the guards, nannies, a driver called Bosco who desperately wants to find a girl to love and marry, a local shopkeeper Leocadie who is a single mother hoping to marry the father of her son, a slightly mad Captain Calixte who wishes to propose to a Mzungu (white) woman to get a visa and leave Rwanda, a teenage prostitute named Jeanne d’Arc who looks after her younger sisters and a little boy they found by the road when running away from machetes, and many other Rwandans, nearly all of whom are genocide survivors. Angel is the character who brings all of those people together, who gets to hear their stories and reflect on life, love, death, justice, and many other things. People trust her as she always stresses that she is “a professional somebody” who respects confidentiality and never gossips.

It all sounds rather serious but in fact this book is basically a ready-made material for a feel-good soap because Parkin managed to create a very warm and cozy atmosphere throughout. Some readers criticise her book for sugar-coating Rwanda but she doesn’t steer away from many difficult topics at all. She just touches on them briefly in each chapter but the range of issues she covers is quite wide. Apart from genocide survivors and genocidaires (prisoners awaiting trials for participation in the killings), she mentions starving street children who sleep in skips, prostitution, AIDS, female genital mutilation, difficult family relationships, suicide, extramarital affairs, gay couples, etc. She doesn’t go into much detail, leaving Angel to reach her own conclusions, and the readers to maybe seek some more information on the subjects if they wish to know more. I guess for that reason it might not be the easiest read for someone who knows little or nothing about Rwanda or Africa in general as certain things might be confusing. Parkin was born in Zambia and has lived in South Africa and Rwanda so she writes about something she knows from experience but while a lot is simply obvious to her, it may not be that clear for a reader with limited knowledge about the continent.

Reading about Kigali and how it looked at the start of the 21st century was certainly interesting for me. It’s great to recognise districts, streets, names of hotels and towns in Rwanda, and many other features of the city and the country I have got to know myself. A lot has changed for the better since 2000, especially in terms of infrastructure and poverty management. But many things have stayed the same, like the different types of expats described in the novel, from the hippie volunteers who wish to submerge themselves in the local culture to well-meaning NGO and international agency workers who genuinely believe in making things better, to cynical consultants who have no interest in knowing whether the projects they work on actually help anyone, as long as they can show that money has been spent (for which they get paid enormous salaries). It’s also interesting to read about Angel sometimes struggling to communicate with the Rwandans on a deeper level and wondering about their aloofness and distance. And once they open up to her, because she is from the outside, a foreigner, so they feel they can share their feelings more freely, she begins to understand more about how the genocide has shaped the people’s mentality. I think this is still very much the case. It takes a long time to get a Rwandan to tell you something about themselves.

I enjoyed Parkin’s first novel. It’s not high literature, but neither does it claim to be. There are lengthy descriptions of cakes which I sometimes skimmed over, and some conversations about heavy subjects are a bit simplistic, but I still thought it was a refreshing read and there were even a few moments when I laughed out loud. However, as I mentioned earlier, if you don’t know much about Rwanda and other African cultures (Angel is Tanzanian, her neighbours include Ugandans and an Egyptian, and there is also a bit of South Africa and Sudan thrown in), you may not understand everything the author talks about, and that can be frustrating. So if you fancy reading about Angel and her lovely cakes, do a little bit of research first to be able to fully appreciate the story.

One thought on “Baking Cakes in Kigali by Gaile Parkin”