There is this rare kind of books which explain things so well that after reading them you feel that this is all you need to know, everything else will seem like a footnote or an afterword. This is not to say that those other books won’t be of any value. Footnotes and afterwords are often very informative after all, and provide an even wider perspective. But they will simply be forever overshadowed by that one special book. If you want to know more about the Rwandan Genocide and have it explained clearly and comprehensively, but you don’t want to or don’t have time to read more than one book, then you’ll be pleased to know that this one book exists. I finished reading it a few weeks ago but the images and emotions that it evoked in me don’t seem to fade away.

“Never before in modern memory had a people who slaughtered another people, or in whose name the slaughter was carried out, been expected to live with the remainder of the people that was slaughtered, completely intermingled, in the same tiny communities, as one cohesive national society.” (p. 302) 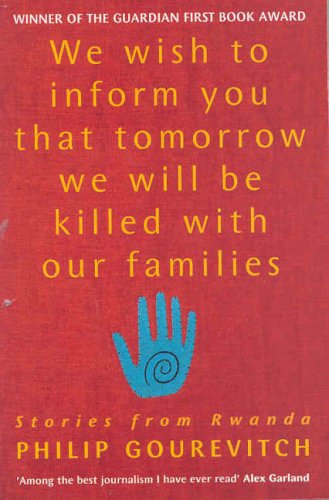 Philip Gourevitch is an American journalist. He first arrived in Rwanda in May 1995 so a year after the Genocide but the fact that he didn’t witness these events first-hand doesn’t mean he was not able to relay them in the most gripping way. On the 350 pages of his book you will find everything you need to know: the history of Rwanda and how the colonial times shaped its society and prepared the ground for the Genocide; the stories of survivors and killers; the insight into Rwandan mentality; the analyses of political situations before, during and after the Genocide, in Rwanda, in the region, and in the world in general; the role of other countries (mainly France and the USA ) and international organisations (especially the UN) in the Genocide, and their reactions in the aftermath; the role of the Catholic Church in shaping the polarisation in the Rwandan society, and its response to the horrors of 1994; how the current president Paul Kagame came to power; details of the crisis which followed the Genocide; and not very much about the author himself – he observes, listens and takes notes but doesn’t judge, giving us a reportage in its pure form. Sounds like a lot, and it is, especially condensed in relatively few pages. However, Gourevitch manages to weave those different stories together to create an account that is not only hugely informative but also very readable. It is a painful read though, even a masochistic one as you constantly feel horrified, angry, disgusted, helpless, depressed, incredulous… and yet, you can’t stop reading. For me this is one of the most important non-fiction books of the 20th century. It not only attempts to explain one of the most inexplicable events in modern history, it also tells a tale of humanity, with all its glory and darkness. There is not a single wasted word in this book. I don’t think analysing it is going to do it justice so let me just share a few quotes.

“The dead of Rwanda accumulated at nearly three times the rate of Jewish dead during the Holocaust. It was the most efficient mass killing since the atomic bombings of Hiroshima and Nagasaki.” (p. 3)

“Take the best estimate: eight hundred thousand killed in a hundred days. That’s three hundred and thirty-three and a third murders an hour – or five and a half lives terminated every minute.” (p. 133)

“(…) the entire Hutu population had to kill the entire Tutsi population. […] If everybody is implicated, then implication becomes meaningless.” (p. 96)

“The”authors” of the genocide, as Rwandans call them, understood that in order to move a huge number of weak people to do wrong, it is necessary to appeal to their desire for strength – and the gray force that really drives people is power. Hatred and power are both, in their different ways, passions. The difference is that hatred is purely negative, while power is esentially positive: you surrender to hatred but you aspire to power.” (pp.128-129)

“But to survivors, the fact that the killer sometimes spared lives only proved that he could not possibly be judged innocent, since it demonstrated plainly that he knew murder was wrong.” (p. 131)

“A number of priests had been arrested for their conduct in 1994, and an official at the Ministry of Justice in Kigali told me that a strong case could be made for arresting [Bishop] Misago. But, he added, “the Vatican is too strong, and too unapologetic for us to go taking on bishops. Haven’t you heard of infallibility?” (p. 140)

“The desertion of Rwanda by the UN force was Hutu Power’s greatest diplomatic victory to date, and it can be credited almost single-handedly to the Unites States. With the memory of the Somalia debacle still very fresh, the White House had just finished drafting a document called Presidential Decision Directive 25, which amounted to a checklist of reasons to avoid American involvement in UN peacekeeping missions. It hardly mattered that Dallaire’s [Force Commander of UNAMIR] call for an expanded force and mandate would not have required American troops, or that the mission was not properly peacekeeping, but genocide prevention. (…) [T]he Clinton administration’s ambasssador to the UN, Madeleine Albright, opposed leaving even the skeleton crew of two hundred seventy in Rwanda.” (p. 150)

“(…) the great worry in Paris as plans for the mobilization got underway in mid-June was whether its troops would find any large concentrations of Tutsis to rescue before the television cameras.” (p. 156)

“The border camps turned the Rwandan crisis into a regional crisis. It remained, as it had always been, a political crisis, but the so-called international community preferred to treat it as a humanitarian crisis, as if the woe had appeared without any human rhyme or reason, like a flood or an earthquake. In fact, the Rwandan catastrophe was widely understood as a kind of natural disaster – Hutus and Tutsis simply doing what their natures dictated, and killing each other.” (pp. 167-168)

“Rwanda has presented the world with the most unambiguous case of genocide since Hitler’s war against the Jews, and the world sent blankets, beans, and bandages to camps controlled by the killers, apparently hoping that everybody would behave nicely in the future. The West’s post-Holocaust pledge that genocide would never again be tolerated proved to be hollow, and for all the fine sentiments inspired by the memory of Auschwitz, the problem remains that denouncing evil is a far cry from doing good.” (p.170)

“Edmond had thought of himself as a Rwandan – he had identified with his people – but after the genocide he lost that mooring. Now, to prove himself his brother’s keeper, he wanted to fix his brother’s killer with the mark of Cain. I couldn’t help thinking  how well Cain had prospered after killing his brother: he founded the first city – and, although we don’t like to talk about it all that much, we are all his children.” (p. 241)

A survivor tells Gourevitch: “Death was more or less normal, a resignation. You lose the will to fight. There were four thousand Tutsis killed here at Kacyiru – a neighbourhood of Kigali” (p. 22). Kacyiru is where I’m currently living. I walk down its streets, I pass Rwandans going about their business, schoolkids in uniforms running home, people talking on their mobiles, listening to the radios, women chatting on the side of the road. Somehow, life goes on.

The quotes come from the paperback edition published by Picador in 2000. The title is a quote from a letter written by seven Tutsi pastors to their leader, Pastor Elizaphan Ntakirutimana, dated 15th April 1994. They were all killed.

One thought on “We Wish to Inform You That Tomorrow We Will Be Killed with Our Families: Stories from Rwanda by Philip Gourevitch”